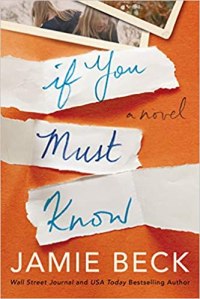 A lot of women’s fiction books deal with the complicated relationship between sisters. If I’m being totally honest, that’s not something to which I can relate. My sister and I are incredibly close – she’s my best friend – and our relationship is blissfully uncomplicated (maybe this is because we’re more like Beavis and Butt-head when we’re together than we are like Jo and Amy March). For that reason, I tend to have trouble with stories where sisters don’t get along or treat each other poorly. And in If You Must Know by Jamie Beck, this is what almost made me put the book down before I finished it. It literally pained me to see a woman treat her sister the way Amanda treated Erin, and for little reason other than Amanda’s own insecurities. But I persevered, and the story – while difficult to relate to and at times downright upsetting – ended up being a satisfying story of redemption and the unbreakable bonds of sisterly love.

Amanda has spent her life striving for perfection. Her mother’s obvious favorite, she’s married to a handsome and successful man with a baby girl on the way, and lives in a gorgeous house. Erin, on the other hand, is bohemian, always broke, and still struggling with the death of her father, who gave her the love and attention she never received from anyone else in her family. She dates losers and makes her money by selling homemade bath products on Etsy. Though the sisters’ taste in men end up being more similar than either thought – Amanda’s husband “borrows” a huge sum of money from her mother and uses it to fake a real estate deal and run away to the Caribbean with his mistress, while Erin’s slacker boyfriend, upon being dumped by her, steals her most prized possession – her father’s collection of classic rock records – and sells them, their different approaches to life cause them to butt heads over almost everything, including how to best handle Amanda’s husband and what he’s done.

There’s a certain crime novel aspect to this story, but the family theme is definitely dominant. My favorite character by far was Erin. Toward the end I started to understand Amanda a bit more, and though I can’t say I really liked her, I was better able to sympathize with her. Their mother, on the other hand, is one of the few characters I’ve ever read that I can honestly say I despised. Any woman more concerned with her reputation in the community than with her daughters’ safety and happiness is just unredeemable in my opinion. It infuriated me to see Amanda manipulated and Erin mistreated by her. I even found myself wishing that whatever was ailing her would turn out to be fatal so her daughters – and I – could escape her.

This is the first book in the Potomac Point series, and the second one, due out in September, appears to involve a different family altogether. I’ll probably read that one as well, especially if I’m able to find out more about Erin and her growing relationship with Eli.

Fans of stories about complicated family relationships with a touch of intrigue will enjoy If You Must Know.

This site uses Akismet to reduce spam. Learn how your comment data is processed.

Buy A HOLIDAY WISH on Amazon

Buy SOME RISE BY SIN on Amazon